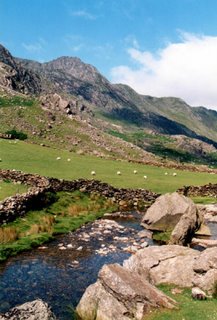 Besides having to write a paper that I have procrastinated on for some time, today was great! I watched Sunday Morning, only the best TV show next to Oprah!!! Worked on my paper, talked to my parents, and went to Katie's for Easter dinner with her and Rick. She made banana bread, which was simply delightful, I could have eaten the whole loaf. Maybe it was just that good because it was Easter, or maybe because I haven't had it in a really long time. I had a little bite of chocolate, which really wasn't exciting, and a little ice cream. It was good, but now I think my stomach is hurting from it. (Or all the other food I ate!!) Katie made me vegetables, which were really good too, I think she just cooked 'em in a little salad dressing, but it wasn't dorm food and it was great company which always makes everything taste better!

Rick was a little sick and had a runny nose, but I think he was feeling better towards the end. He was reading Katie's old journal thing. That way he read it was hilarious, I've never met anyone who could make fun/tease her so much and not get in trouble. Maybe that's what love is all about and why they're getting married.

Tomorrow is a big day. It's the first day I'm teaching the middle school class at Wilson, I'm bringing in matza for them to try (this has nothing to do with the actual lesson which is over the founding period and the shaping of the nation.) Then I have geography, followed by the Rotary interview, and then a meeting with the chair of the history department who will hopefully be my thesis advisor, then night class where I turn in my sociology of religions paper. I'm excited, but exhausted just thinking about it.

Just a random thought: The picture is of Snowdonia, which is in Wales. I think I could live there in a little cottage, I'm sure there is a golf course nearby. That would be plenty.

My first hit on getting your blog randomly come up. Hmmm, anther being that is good for the world. Too bad about the assholes. It's all relative of course. Your sister's a charm. Keep the faith.

norman holler
www.enwrites.blogspot.com (warts and all)