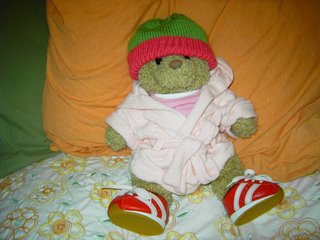 I knitted this adorable little hat...on accident, but at least it fit my teddy bear. She's beautiful!
Posted by Andrea at 9:40 PM 3 comments:

I'm home, it's lovely, especially since I'm going back tomorrow. My parents took me to see Little Miss Sunshine. I was literally laughing so hard I had tears running down my cheeks! We went to The Town, a little one screen theater. The owner is an old man who sits at the down with his dog and takes tickets. At intermission, yes there is an intermission, his wife serves coffee as the line forms to get cake and cookies. There are two suits of armor that decorate the sides of the screen as well as shields that hang on the wall. In conclusion, The Town is a gem.

Tomorrow we're driving to Chicago to see Rick and Katie for lunch. Then I'll be heading back to beautiful Muncie to get some homework done. This week will be rough, but for the most part, things are settling down I suppose. I'm leaving for Germany on Christmas day and on January 13th I'm going to Rome to take the Praxis test. If I pass, I'll still be able to graduate in May. We'll see what happens. Everything happens for a reason, right? Right...
Posted by Andrea at 10:52 PM 2 comments:

I despise jumping through hoops, that really seems to be what this year has been for me. They're not enjoyable hoops either. It's like Mario having to get six golden coins, then still having to pass the final level only to jump over lava, avoid flying fire balls, and kill the evil man lurking in the cave who has more lives than a black cat on Halloween. Except there is no restart button, or even a pause! Sometimes I just want a breather, but it seems I can't get above water. Or I think I'm close, the surface it right above, the rays of light are filtering in, but then everything changes and the tide comes in, taking me farther from my goal. Having adopted for four years, I would have hoped I'd have fins by now, but no such luck.

Enough with the metaphors, I want to get out of here and graduate. Everytime I think I do enough homework, I still have four more novels to read, or I make great progress on my portfolio and then the rubric is flipped upside down. I want to come home and relax, but my house is so tense and I feel like I'm walking on egg shells not to piss anyone off, but then another part of me doesn't care at all. The three of us sat down and talked, but I feel like it's almost worse now. I want to write down everything that I feel, but I know my roommates read this and I'm sure I would offend someone, even though it's just my own ridiculous OCD tendencies.

I want to be out of Muncie and away from my sister, Ball State is the last thing I need to get rid of to be completely away from the path I once followed to be like Katie. I feel like I'm suffocating because it was the wrong choice for me to come here in the first place. I won't say that I haven't learned or grown, but I think I would have been much better off someone else, somewhere I was passionate about going and free to be myself. I feel like I'm constantly judged here against standards that aren't my own.

Plus, I'm lonely, so I've slept with this boy a couple of times, that I shouldn't sleep with because it's not fair to either one of us. Because it's not real, but I hate sleeping alone. Hate it.

I don't want to alarm anyone, this isn't my usual happy-go-lucky blog, but I needed to vent, and tomorrow is a new day. A day in which I have a midterm on early philosphers in my PoliSci class that is worth 1/4 of my grade, then I'm going to try to give blood again since my iron was too low today.

I'm working on homework and passing all my requirements to student teach today! I got back from an awesome trip to Cincinnati to visit Lisa last night. We went to services and danced with the Torah. Watching old men run around with scrolls over 100 years old is incredible. It was like watching someone dance with the love of their life, literally. (and I mean that in a good way) We went out to a brewery for dinner, I met Lisa's brother, Adam, who is adorable. I have a little innocent crush, not gonna lie.

Before I starting working on my homework, I vaccuumed the living room floor so I wouldn't get dog hair on me or my things. I really thought I was getting less OCD, maybe not! 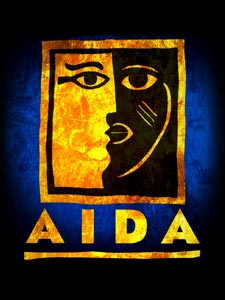 I saw Aida last night with my summer buddies. I was really impressed. I had no idea what it was about, but I loved it and I can't get enough of the soundtrack now! I cried...I didn't expect that, but obviously it was moving. I'm always a sucker for a good love story.
Posted by Andrea at 7:26 PM 2 comments:

It's not so much the feeling of hunger that's difficult to deal with, just the intense headaches and tiredness that comes with no food or water. Plus, your throat really hurts, it's dry, scratchy, and raw. I wanted to sleep and I did fall asleep in my 9am Middle East history class, which led to me appologizing to my teacher afterwards.

Another bad part is that when I actually did get to eat, my throat hurt so much it wasn't that enjoyable. Then there is sooo much food, and you want to eat all of it, but you get stuffed so quickly. I was a little sad by how little I could eat. And more sad how huge my stomach feels right now.

In the end, I'm very proud of myself for doing it. I don't know if it was more to prove myself to G-d or to myself, but I'm glad I did it. Here is to a great year. Cheers!
Posted by Andrea at 6:41 PM 2 comments:

Today is the Day of Atonement and on this day Jews fast from sundown to sundown. So I stopped eating yesterday after dinner and ice cream with my family and I won't eat or drink (maybe a little water) until 6pm tonight.

It's crazy, I already have a headache and my throat is soooo dry. I think it'll be worth it.
Posted by Andrea at 6:59 AM 1 comment: