Today is the Jewish New Year. It'll be a good year.
Posted by Andrea at 8:34 AM No comments:

Article about Europeans' views of Jews and Muslims.

http://pewglobal.org/reports/display.php?ReportID=262
Posted by Andrea at 7:48 PM No comments: 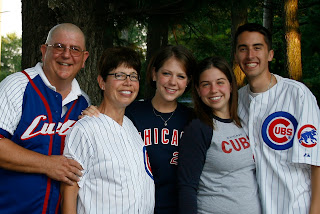 So, if you're not American, you may not know that the Cubs won their division.  If you don't know my family very well, you might not know that you are also born a Cubs fan. So in honor of this lovely game that clinched the division, my mom decided she wanted to take a family picture with our Cubbie apparel.
Posted by Andrea at 12:39 PM No comments:

http://www.youtube.com/watch?v=CqHTScDBsDU
Posted by Andrea at 5:12 PM No comments:

http://alexfiedler.blogspot.com/2008/08/alexs-message-to-auntie-katie-on-her.html
This was the cutest thing.  My sister's nephew wished his "Aunt Katie" good luck in her first day of school! It is on Alex's blog, so here is the link!
I love Katie too!!!!
Posted by Andrea at 8:25 PM No comments:

There is SO much rain...school is canceled tomorrow!!
Posted by Andrea at 6:26 PM No comments:

Due to rain, my parents didn't do anything they were suppose to do this weekend and were thus home....although I also couldn't have gone anywhere because 94 was flooded, I should have gone to Katie's.
Posted by Andrea at 12:26 PM No comments:

Last night was Portage's homecoming game against Merrilville. They won the game 22-20, which I guess was an upset, they weren't suppose to win.  The royalty went off without any errors. The ladies were very beautiful and no one fell.  It is nice being an advisor and not a student.  There really isn't any stress involved, at least for me.  But it was really nice, the rain didn't even really get in the way.
Posted by Andrea at 7:50 AM No comments:

I got paid today for the first time...it all seems rather unimportant right now.  I am really grateful for everything I have.
Posted by Andrea at 6:49 PM No comments:

Giving my first tests tomorrow! I hope the students do well. =)
Posted by Andrea at 8:58 PM No comments:

Posted by Andrea at 6:17 PM No comments:

I like taking Jackson on walks because little children love him!! They get huge smiles on their face! Especially cars that drive by with little kids inside because they don't really realize how big he actually is, and I can see their smiles and bright eyes through the windows.  =)
Posted by Andrea at 1:04 PM No comments:

The Turkish President, Abdullah Gul, is to attend a football match in Armenia, his office says, signalling an apparent thaw in relations.

The Turkish and Armenian teams will face each other for the first time in a World Cup qualifier on Saturday.

The two countries have no official ties and their shared border remains closed.

Turkey has rejected Armenia's campaign for the killings of some 1.5m of its citizens, by Ottoman Turks between 1915 and 1917, to be classified as genocide.

More than a dozen countries, various international bodies and many Western historians have recognised the killings as genocide.

Turkey admits that many Armenians were killed but it denies any genocide, saying the deaths were a part of World War I.

Mr Gul will become the first Turkish head of state to visit the Armenian capital, Yerevan, when he attends the match with his counterpart, Serge Sarkisian.

This visit is likely to be highly controversial in Turkey, says the BBC's Pam O'Toole.

The Armenian invitation has already sparked a major debate, with some nationalists regarding the fact that the president was even considering taking it up as a betrayal of the country's national interests.

Some columnists have questioned why Mr Gul should visit a country they refer to as Turkey's enemy.

The main opposition party has said such a trip would be a major deviation from state policy, while others see it as a valuable chance to break the logjam in relations, our correspondent says.

A statement on President Gul's website expressed hope that the trip would provide an opportunity for the two countries to understand each other better and create a new climate of friendship in the region.

Turkey and Armenia have had no diplomatic ties since Armenia became independent from the Soviet Union in 1991.

Their common border has been closed since the war between Armenia and Turkey's ally, Azerbaijan, in the 1990s over the disputed territory of Nagorno-Karabakh.

Posted by Andrea at 3:40 PM No comments: 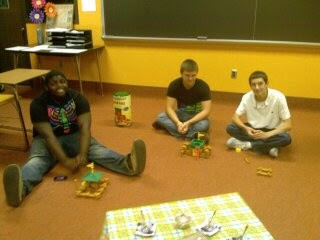 One class finished so early today because Channel One didn't play, so for about 5 minutes we played with Lincoln Logs, and then discussed how the Sumerian's and Egyptian's couldn't use logs because their weren't any trees and thus no wood, which is why they used mud bricks. Everything is historical. ;-)
Posted by Andrea at 1:23 PM No comments:

I got my haircut today.
Posted by Andrea at 8:26 PM No comments: