I didn't really explain what Expedition America was...it is a class at Highland High School which hikes for a few days and then goes to historical sites...at Chesterton High School, it is called Trail Bound, and I went twice when I was in high school. One year we did Civil War sites and the next, the Revolutionary War.

When I went with Highland as a chaperon, we did some hiking in the Smoky Mountains in North Carolina on the Tennessee border, followed by some incredible Civil Rights tours. Birmingham to a wonderful Civil Rights Museum and to Kelly Ingram Park and the 16th Baptist Church where a bomb killed four little girls. We went to Selma, the scene of Bloody Sunday on Edmund Pettus Bridge. Selma was also the starting point of the march to Montgomery. On the drive over to Montgomery from Selma, we stopped at a National Historical Site, in Lowden County, where Tent Cities were established to house blacks who were evicted from their towns so they couldn't vote. In Montgomery, we saw the Civil Rights Memorial and signed the wall of tolerance. We visited the steps of the capital where MLK Jr. gave a very famous speech to the marches. Also, in Montgomery, we went to the Rosa Parks museum which is actually on the block where she got on the bus that started the boycotts. We continued to Memphis, Sun Studios and Stax Studios, the music that came out of Memphis is unreal!

There were days we played basketball and frisbee in intense heat, but it was better than just sitting around. We really had a blast. Rob and Bob, the other teachers, are great great guys. I thought we worked well together, maybe they got annoyed with me at times, but for the most part, I think we made a great time. I hope I can go again next year! (Or start my own at Portage!!)
Posted by Andrea at 8:02 PM No comments: 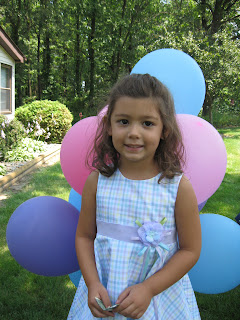 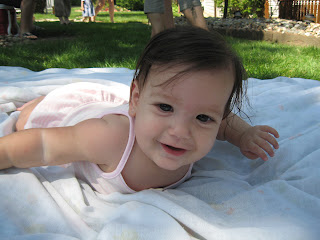 Posted by Andrea at 4:46 PM No comments: 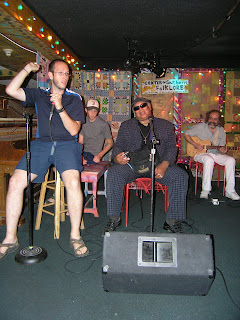 Mr. B and Joel jammin' with these awesome blues guys! 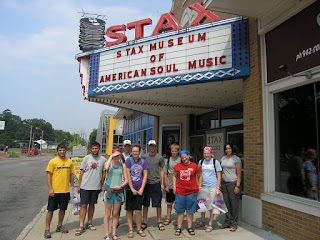 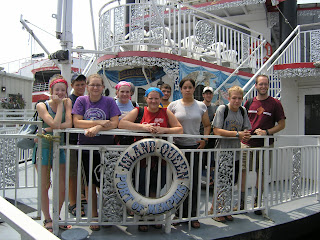 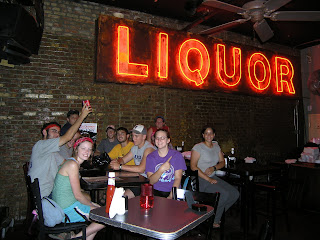 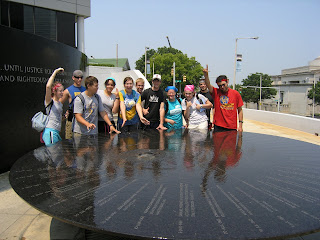 Students at the Civil Rights Memorial in Montgomery. 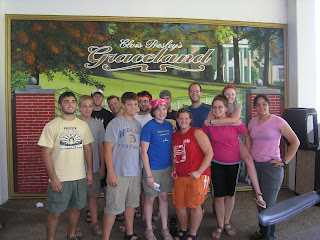 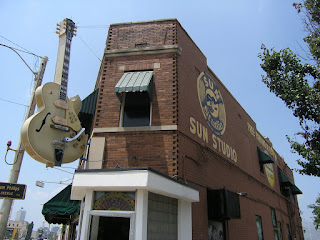 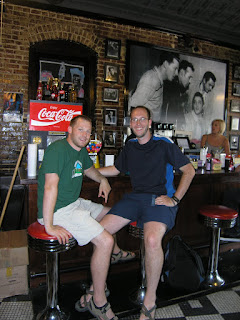 Posted by Andrea at 5:54 PM No comments: 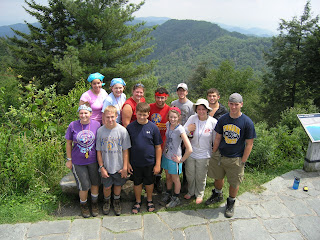 The students at the "New Found Gap" after two days of hiking in the Smoky's! 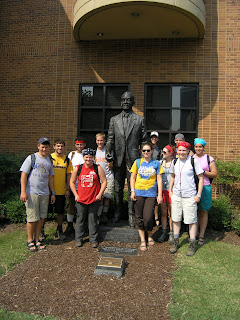 Students with Rev. Fred Shuttleworth outside of the Civil Rights Museum in Birmingham, AL. 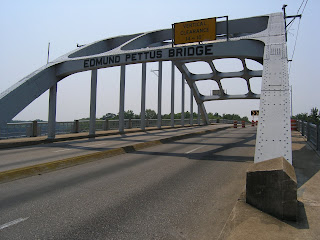 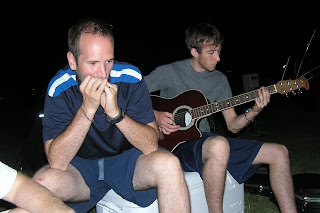 Mr. Blumenthal and Joel playing a little tunes around the campfire!

Posted by Andrea at 5:37 PM No comments:

A summer filled with art

PORTAGE | Andrea Riley has spent some of her summer days getting ready for Christmas.

A media clerk at Crisman Elementary School, Riley participated in a summer ceramics workshop organized by Portage High School art teacher Paula Wiese. During six classes over four weeks, she created a slew of ceramic snowflake ornaments for her Christmas tree. She made a vase and other items, as well.

More than a dozen students and Portage Township Schools staff members participated in the summer session created to give Wiese a chance to finish some work related to a $10,000 grant she received through BP's A+ for Energy program, which helps teachers fund projects promoting energy education and conservation in the classroom.

Students in Wiese's upper-level ceramics class created tabletop fountains that run with solar-powered pumps. She said she was planning to be at the school this summer, anyway, completing her report of the project. She had another reason for firing up the art room's kiln and spinning the pottery wheel into action this summer.

"I didn't get to make my fountain," Wiese said. "That was the most motivating."

Students paid $10 and staff members $30 to learn to make the ceramics. They were allowed to make as many items as they wanted over the class meetings, Wiese said.

"We get to make a lot," said Connie Melton, a home-school adviser at South Haven Elementary School. "She gave us some basic skills, and she let us make whatever we wanted."

Melton took the class with her daughter, 15-year-old Sarah, who will be a freshman at the high school in the fall. Sarah said she liked working with the pottery wheel. Others weren't such fans of the wheel.

"The only thing that was frustrating was the wheel," said Julie Whitten, a fifth-grade teacher at Jones Elementary School. "That pottery wheel is hard work."

Participants in the debut summer workshop already have signed up for next year's class, assuming Wiese gets permission from school administrators to offer it again.

"Any class where people want to be here is successful," Wiese said. "Then, it's easy. They motivate themselves."

Last night I stayed with Katie and Rick and Katie made some great dinner. And we watched many episodes of "Weeds"...it is really relaxed being there. Katie and Rick are so funny together. =)

I had to leave really early this morning to come back for an eye doctor's appointment, then I went to Portage for another computer class thing for teachers. Then I went to give blood...then I went to Rob and Erin's so Rob could help me pack and make sure I had everything for Monday. I am going to borrow Josh's tent, since I don't have one.

There was a shooting at the US consulate in Istanbul. Article below:

I made this eggplant and chickpeas thing. It wasn't perfectly Turkish, I think the eggplants are different here. I know that sounds silly, but they really are. But it still tasted good. Yum!
Posted by Andrea at 9:55 PM No comments:

I bought a car last night.....it's old, but beautiful.

Prospect Magazine has announced that Fethullah Gülen, the leader of an influential Turkey-based global Sufi-oriented Islamic movement, has won the international poll to choose the World’s Most Influential Intellectual. While Gülen and his ideas are widely admired, he also is feared and hated by some in Turkey who see his enormous reach and publishing empire and his well-educated and well-organized followers as threats to Turkey’s secular state and society. The position of women outside the center of power in the Gülen community stands in contrast to Gülen’s teachings about the equality of women.

Here are the Top 10 Influential Intellectuals

The Prospect calls Gülen a “modern Ottoman” and his approach “Islam-Lite”:

[He] promotes an open brand of Islamic thought and… is preoccupied with modern science… Unusually for a pious intellectual, he and his movement are at home with technology, markets and multinational business, and especially with modern communications and public relations—which, like a modern televangelist, he uses to attract converts. Like a western celebrity, he carefully manages his public exposure—mostly by restricting interviews to those he can trust.

Many of his converts come from Turkey’s aspirational middle class. As religious freedom comes, falteringly, to Turkey, Gülen reassures his followers that they can combine the statist-nationalist beliefs of Atatürk’s republic with a traditional but flexible Islamic faith. He also reconnects the provincial middle class with the Ottoman traditions that had been caricatured as theocratic by Atatürk and his “Kemalist” heirs. Oliver Leaman, a leading scholar of Islamic philosophy, says that Gülen’s ideas are a product of Turkish history, especially the end of the Ottoman empire and the birth of the republic. He calls Gülen’s approach “Islam-lite.”


Prospect admits that the election of Gülen was the result of active organization of votes by his supporters and the sympathetic Zaman Newspaper:

On 1st May, Zaman—the highest-selling newspaper in Turkey, with a circulation of over 700,000 and a string of international editions—ran a story on its front page alerting its readership to the appearance of Gülen on the Prospect/FP list, and to the fact that we were inviting people to vote. Zaman is known to be close to the Gülen movement, and over the coming weeks the paper made regular reference to the cleric’s appearance on our list. The poll was also noted in other Turkish newspapers, as well as on every single Gülen website, official and unofficial, we were able to find.

The efficiency and discipline of the Fethullahci is legendary—so in retrospect, for them, a poll like ours was simple to hijack. The temptation for Gülen’s followers to elevate their man to the top of a poll organised by two influential western magazines will have been a strong one. In one respect, then, Gülen’s crushing win tells us little about what the world thinks about its intellectuals; it merely exhibits the organisational ability of one movement’s followers. On the other hand, perhaps we can see through Gülen’s victory the emergence of a new kind of intellectual—one whose influence is expressed through a personal network, aided by the internet, rather than publications or institutions.