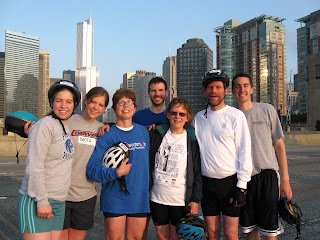 Posted by Andrea at 6:17 PM No comments:

Day at the new modern wing of the Art Institute!! 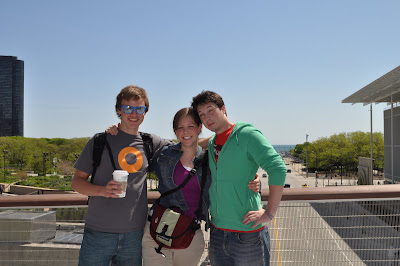 Mathis, me and Michael! 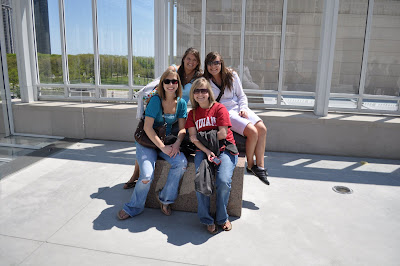 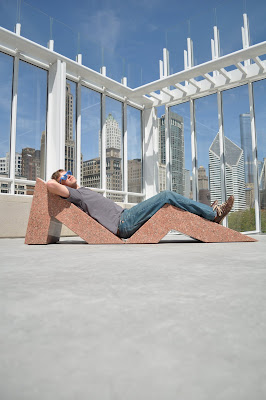 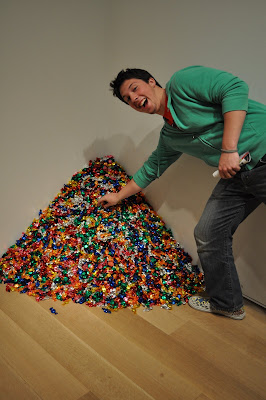 Big pile of candy that you can eat that is modern art!! It definitely brought a joyous reaction!

Posted by Andrea at 9:07 PM No comments: 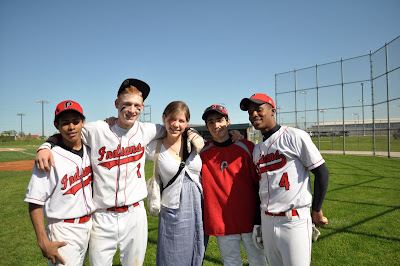 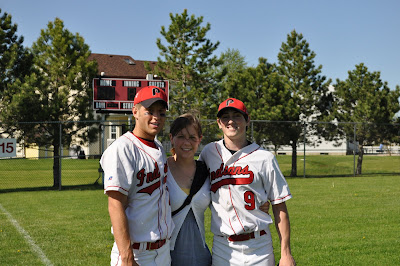 More of my favorite baseball boys! 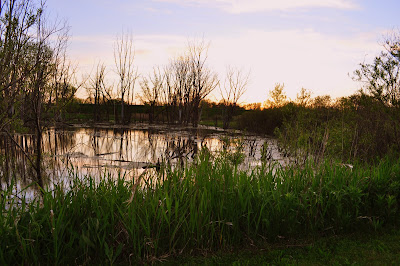 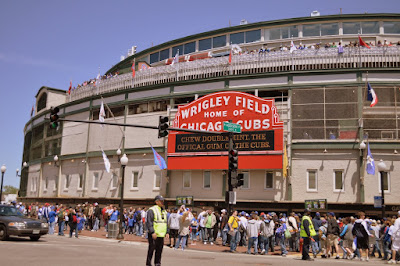 Posted by Andrea at 9:50 PM No comments:

America must deal first with the threat from Iran

Of all the issues facing Benjamin Netanyahu, Israel’s prime minister, as he prepares to meet US president Barack Obama on Monday, the linking of the Iranian nuclear threat and the Israeli-Palestinian conflict is the most grave.

Generations of Israel’s leaders have sought to avoid links between the conflict and other regional confrontations, assuming they would be pressured to make concessions to further US and European interests in the Middle East.

But the Obama administration is openly telling Israel that its policies on the Palestinian dispute must be crafted in such a way as to enable Washington to build a credible and powerful anti-Iranian coalition including the moderate Arab regimes. Indeed, the US is turning Israel’s policy on its head, telling her that by placing the Iranian nuclear threat at the top of Jerusalem’s priorities and demanding it be given precedence on the agenda, Israel is demanding “linkage in reverse”.

While Iran’s nuclear threat, coupled with its policy denying Israel’s right to exist, is a predominant factor demanding an extraordinary international response, other aspects of Iran’s involvement in the Israel-Palestinian conflict are assuming ever-growing importance. In addition to Iran’s traditional sponsorship of the Lebanese Hizbollah movement in Lebanon, Tehran has sought direct influence over the Palestinian liberation effort. For close to 10 years, Iran has invested heavily in Hamas, upgrading training and equipment. If the convoy of Iranian equipment sent via Sudan in January had not been destroyed, its arrival in Gaza would have put most of Israel within accurate missile range. All-out regional war might have been unavoidable. Iran, through Hizbollah in Lebanon and Hamas in Gaza, is constantly upping the ante.

Iranian support has been a key factor in solidifying Hamas’s political power base in the Palestinian territories. Not only is Gaza firmly in its hands, but all the combined efforts of Israel, Fatah, the US, Europe and the moderate Arab regimes to reduce Hamas’s status in the West Bank have proven futile. Hamas recently completed a round of internal elections across the movement, and polls show it would win a majority in the West Bank. Fatah, still struggling to try to hold its party congress, not convened for 20 years, has become a politically hollow movement. Even if the Palestinian Authority signed a peace agreement with Israel, it could not implement it in the West Bank, let alone Gaza.

Thus it is on two levels that Iran has emerged as a spoiler of the “peace process”: its nuclear ambitions pose an unprecedented strategic challenge to Israel and the free world, and its activities on the ground are the biggest block to efforts to reinvigorate the Israeli-Palestinian negotiations.

The US would, hopefully, never countenance granting Iran a role in the Middle East peace process, given Tehran’s desire to bring about the demise of the state of Israel. So, when Mr Netanyahu meets President Obama, the prime minister will attempt to avoid simple linkage and instead focus on a “sequencing” strategy calculated to defang Iran’s military nuclear aspirations through diplomatic or other means.

Thus it is essential not only to remove the deadly international threat, but also to rid the Palestinian scene of Iran’s destructive involvement. In the absence of this, efforts to aid the Palestinians in nation-building, economic development and security self-reliance are doomed to failure. Moreover, the stability and survival of many of the moderate Arab regimes in the region will come under pressure if Iran is not effectively restrained.

Hamas, freed from dependence on Tehran and reduced to facing realities, could emerge as a reasonable partner to ailing Fatah in a new order in Palestinian society. Therein lies a promise for the future. Political negotiation with Fatah, the legal political master of the Palestinian territories, must be resumed in order to signal Israel’s commitment to a two-state solution but realistically all those on board must face the dangers of the moment. The “sequence” must be clear: Iran first. An Obama success in Tehran will provide him with the clout he needs to further his other targets in the Middle East. He will find Mr Netanyahu a dependable ally on the Iranian front. After that, Israeli public opinion will overwhelmingly rally behind a policy of reconciliation with Palestinians, with all the painful Israeli concessions that this will entail.

Posted by Andrea at 2:20 PM No comments:

Katie Hurckes, aka my sister! 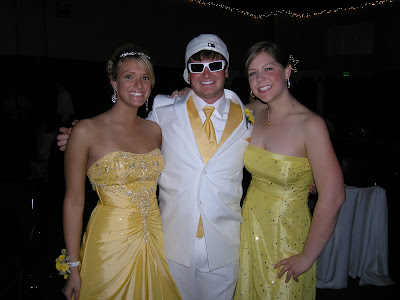 Taylor, Matt, and ME! 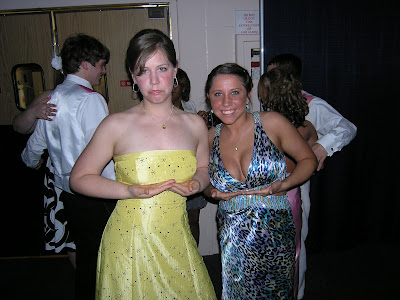 My student has bigger boobs than me! 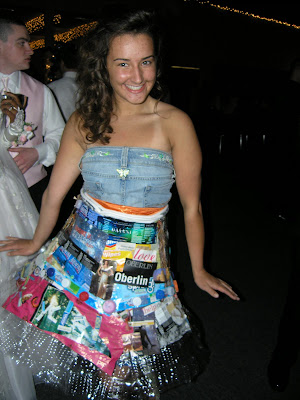 This is Jessica, the article in the previous post is about her dress!

Posted by Andrea at 9:25 PM No comments:

PORTAGE | Jessica Sobocinski's dress was like no other Friday at the Portage High School prom. It wasn't full of lace and frills. It wasn't beaded, with a slit on the side.

Instead, it consisted of water bottles, newspapers, magazines and newspaper bags. Her dress completely was made of recyclable materials.

At the beginning of the school year, Jessica, a senior, came up with the idea to wear a dress to consist of recycled materials. Her family's kitchen table was covered with all the materials for weeks as Jessica constructed the dress.

"I have really become aware of the environment," Jessica said. "And I wanted to make something that shows that. I want to save the planet and I'll start with this dress."

"My daughter goes crazy with recycling," Shawn Sobocinski said. "She's an environmentalist in the making. The dress is very cool and different."

At first, her mother wasn't too sure of the idea and couldn't picture how the dress would look. But once Jessica started putting the pieces together, it all made sense, and her parents said they are proud of her efforts.

"This definitely saved us a lot of money because she spent nothing to create the dress," Shawn Sobocinski said.

Jessica's purse matched her dress and is made up entirely of newspaper bags. She did the same with her garter. Her date, Nate Livingston, will be in a tuxedo, but his tie will also be made out of newspaper bags Jessica created.

The final touch to Jessica's outfit for the evening was her flowers -- dandelions from her front yard.
Posted by Andrea at 5:56 PM No comments: