Everything I haven't said for the past weeks or so. 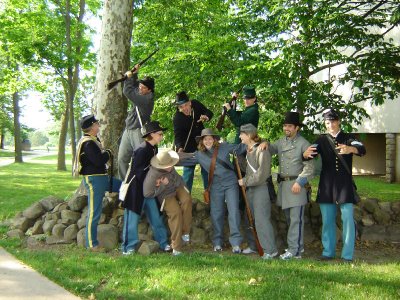 Have you ever eaten a peppermint while drinking hot chocolate? It's darn good, you should try it.

A month or so ago, not long after I started writing a friend of a friend called me a whore, so I haven't made out with a guy for a really long time, (well, it seems like a long time in my head.) I like it, I feel good about it, and I don't plan with making out with anyone for a very long time. So I'm glad that it happened.

For my international relations class, I have an 80 year old Chinese man. I can't understand him or read his writing on the board, nor can anyone else in my class though. He told us he eats ginger, onions, and garlic to stay young. Plus he walks 15 minutes to school each day and drinks green tea! In other words, he's adorable.

My history class should be interesting, much more socially, economically, and politically based on Civil War study then the military triumphs or defeats which is nice, especially after last summer, not that I didn't enjoy everything I learned from Josh, Kevin, and Chris. There is a ton of reading a ten page paper. I think I'll be all right.

My public policy professor is awesome. I had him for Pols 130. He's hilarious. We were talking about being opened minded and reacting to people's opposing views. He told us we should be grateful to see a different point of view. We should say, "Thanks Public Policy buddy! I didn't see it that way!!" I was cracking up. Then today, on a similar topic we were discussing how policy makers have to convince someone to see things their way. He used an example of his daughter eating peas, she hates peas, but he loves them. As a father he thought she had to eat her vegetables. He goes, "I just didn't understand [that she didn't like peas] because when I put peas in my mouth, I say YUMMYYYYY!" He was so excited about the peas. I just laugh the whole class. It'll be a fun 5 weeks, and a whole lot of reading.

My sister is settled in in Iowa. (Great state I've heard, even if there are 6'6" Republicans there.) I think she likes it, she's being taking a lot of walks, I bet she's a little bored. Rick seems to like his job, and I bet he's a little bored too. (I just heard through Katie, I haven't talked to him since Chesterton when his car alarm went off in our driveway and he got pulled over my a police officer while driving with only pajama pants on! I bet if it was recorded he could have won America's Funniest Home Videos.) But I'll miss Rick. Not that we really hung out ever or that I even really saw him. Every once in a while the three of us would have dinner or I'd pass him in a hallway, or I'd inappropriately wave to him while he was in a meeting. But he always listens when I needed to talk and was always a voice of reason, seeing the side I did not see, or really did not want to see. I know that won't necessarily change, but it's nice to be close just in case.

My room is quaint and colorful, but also freezing! They turned off the steam in the building because they're working, since it's cold here, my room is cold. I go to bed with freezing toes every night, it's rather miserable after 9pm, particularly for my feet. I've been eating a lot of yogart, the non-cooking kind. Really, I don't think you can cook yogart (unless you're baking with it, there was a lemon pie I made a while ago that called for it), but the point is, I'm eating things that don't involve a stove.

All right, back to reading about slavery and then about public policy. I wish I was in Gettysburg with my friends, I miss them. I know they'd give me some good lovin'!
Posted by Andrea at 6:45 PM