Something about them Turkish boys... 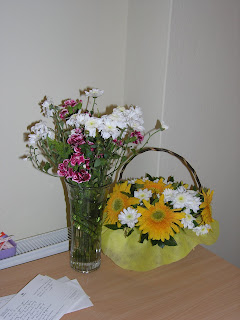 Look what you get when you're sick!!! Plus the huge pile of letters and postcards I've been unable to mail!!

The first day I was sick, I texted my friend to tell him that I didn't go to the Black Sea. I just didn't want him to think I was somewhere I wasn't. Plus, if I actually did need something, I wanted to make sure someone knew I was sick. But that night he showed up at my door with orange juice and peach juice. It was really sweet and completely unexpected. The next day he was going home for the holidays so he stopped to see me on his way out of town and he brought me flowers for the holiday!

I went to a movie Friday night with my friend Haley, we saw Stardust and I loved it!!! But during intermission (weird, people go out and smoke, it's disgusting) I had a text from my friend who told me if I needed anything because I was sick let him know. Good to know, except I still don't know how he knew I was sick in the first place.

Then yesterday, I went to the hospital because I wasn't getting better and I got two IVs of liquids and the doctor gave me four persciptions to kill the bacteria in my stomach. So not only is it Sunday today, but also a week of Christmas-like holidays. There are 4 pharmacies open in this whole city, or so if felt. So I texted my friend and asked him how I could find one of these so called open pharmacies. He just said, "what do you need," and replied, "I need to get medicine taht the doctor gave me last night." Then he said, "What are they." I wrote, "Are you kidding? I can't decipher what the doctor wrote, I can try, but it's okay, I can get the meds tomorrow." At this point, I'm like, this is ridiculous I can't even read what the doctor wrote. Plus in America, you would need the perscription form to get them. I guess that's not the case in Turkey. So I emailed him the perscriptions because there is no way I can text everything. I don't really hear anything from him and I take a shower and get dressed. Then he calls and he's like what's the number of your apartment. Then two minutes later the doorbell rings and he's standing there with all four meds. But it was crazy because he didn't know where I lived. I think these Turkish people have networks of spies or something. I was so grateful...and the best part. He brought me flowers too. =)

So now, I actually am feeling much better. No headaches or dizziness. No stomach twisting pain. Still using the bathroom, but not nearly as much.
Posted by Andrea at 6:13 AM

Maybe I should marry me a Turkish boy. They sound wonderful...Hope you're feeling much much better.

Good you're better.. :)
I have heard alot of bad things about the turkish boys.. :| But this story made me think something else.. I know alot of turk boys.. And some of them is very nice.. :)