The hills are alive with the sound of music… 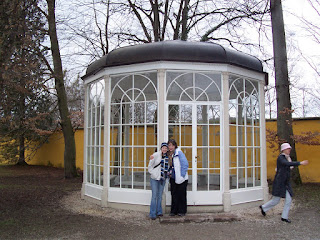 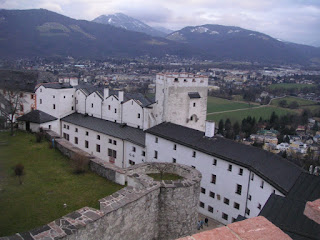 Part of the fortress. 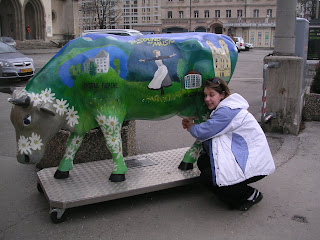 The Sound of Music cow... 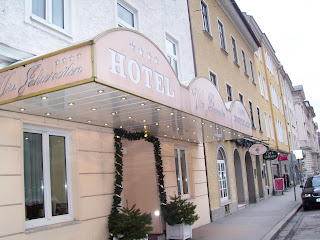 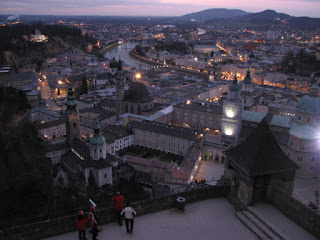 Salzburg is an absolute beauty. I had a wonderful weekend with terrific friends. I drove 8 hours to Salzburg and missed the time to check into our hostel, but we ended up getting a great deal at a lovely, unique hotel since we arrived so late (and flirted...)

Liz, Steven, and I went on the Sound of Music tour!! It was an absolute delight, as was our flamboyant guide, Peter. Our drive Marcus yodeled for us too!! We tried some Aumdoodler, the Austrian soda pop while we were overlooking the 7km long lake that rested between two magnificent mountains and went into St. Michael’s church where Maria said “I do” to Captain Von Trapp! The gazebo is quite small and the line of trees where the children climbed was bare, but the flowers in the gardens where still in bloom and the Von Trapp mansion was as yellow as ever!!
We also climbed up to the most intact medieval fortress in Europe! Hellburn Shloss (The Hellburn Castle) held a spectacular view of the city, especially after the sun had set. Dinner was at Pasta and Vino where we ended up eating in the kitchen. The two workers only spoke Italian and called our table “America.” They also gave us a shot of Grappa! We had a wonderful meal and a terrific atmosphere for our “Goodbye Salzburg” dinner.
Posted by Andrea at 3:13 AM

I'm so happy that you are having such a wonderful time!!!