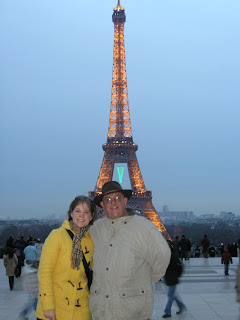 I was quite ignorant. Of course I wanted to see the sights in Paris, but once I actually saw them, I was in awe. Pictures hardly do the city justice. The Arc de Triomphe is so detailed. Napoleon would have been proud if it was only finished before he died.

Having visited the Art Institute hundreds of times in my life I expected to be an expert at the Louvre, but I was quite mistaken. The museum is never ending. It’s not just the art work on the walls though; it’s the ceilings and architecture. Even the bathroom I used (go figure) had a butt of a statue in the window. I wish I had taken the camera in with me.

The hot chocolate in Europe is much better than home. I’m fairly sure that it’s because they put loads of cream in everything. Haha. The Eiffel Tour was also much more magnificent in person. Every facet (I think that’s a word my dad would use) of the tour is beautiful. There are twirls and shapes. It’s actually a light brown color. From pictures I always thought it was black. The line to go up so ridiculously long. We walked across the Seine River and when we looked back the lights were on. Paris is a beautiful city, but like many people have said, it is a little dirty and smelly.

This morning we left for Notre Dame before 8 am in the rain. Dad was of course afraid we would miss our train to Brussels. The cathedral isn’t so big as it is old and high. The ceilings keep going up and up. The stained glass windows aren’t original. It’s very dark inside, no one could read when it was originally built, but when people started to read, they knocked out all the stained glass and put in clear glass. Still the stain glass is beautiful. I wish I knew more about the Catholic saints because there are pictures and statues everywhere. But with my good Jewish upbringing, we didn’t learn about the saints.

Brussels is a quaint little place. There is chocolate, waffles, and French fries EVERYWHERE! Some people may say that it’s heaven. There are castles and the king is home. I didn’t get to meet him though. L We bought mom chocolate from a man who has a shop across from our hotel. He was so nice and gave us free pieces. This city is much more than I had ever expected.

I want to be in Paris.

Where will you be for New Years!

We're in Brussels now and will be for the New Year. Wish you could be here!! Love and miss you.