Today is an amazing day for Israel and Israelis. Gilad Shalit who was was imprisoned in Gaza by Hamas for over five years, 1,941 days, was freed this morning after long negotiations in a prisoner exchange. 1,027 prisoners were released from Israel for Gilad's return. 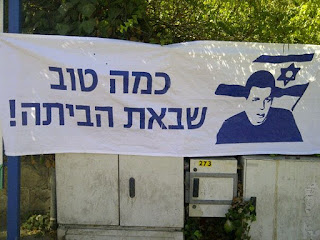 These posters were hung all over Jerusalem says "How good is your coming home." 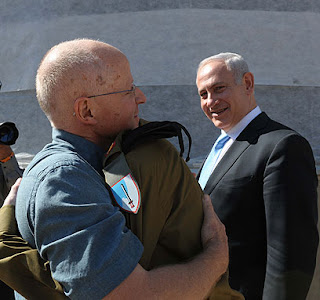 
Many people are upset about the exchange, saying how could Israel release these murders for one life. But as a sister, daughter, and hopefully one day a mother, I believe Israel did the right thing. I am really proud to be an Israeli today. A good friend and rabbi said this, "Israel is like no another country. People may say that because we value life so much and care about each other so much -it is our greatest weakness, but it is actually our greatest strength." I am happy to live in a country and be a citizen of a country that so greatly values life and sticks to its word. I really understand people's concerns with releasing so many terrorists, but we don't know what the future will bring. And so today we must rejoice that Israel saved a life and reunited a family.