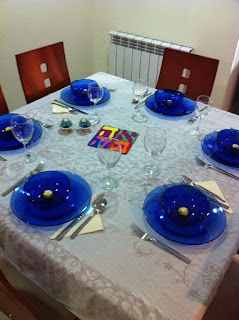 My table is ready! Tomorrow for lunch we're having a vegan Shabbat at my house! I made vegan chili. quinoa (a grain) with pomegranate and apple, and everyone else is bringing the other things! It'll be lovely. =)

I have a great story from the week for Shabbat! I was in my Humash class and we were learning the gemertria, and my teacher told us to add the number of the letters of our name..Andrea אנדריאה is 270...if you write 270 in the simplest form it is רע which is "bad" in Hebrew! I was SO sad! My name means bad?!?! (In Hebrew they actually write 270 as ער instead so no word can mean bad.) I was really upset and my teacher was like, really? What's your Hebrew name? And I said דורית Dorit, and he said, that's not 270..that's 620 and 620 is a great number in Hebrew, and I almost yelled, "and 620 is my birthday!!!!!!!!" (June 20th) and he said WOW!! gemertria in action!! (Because gemertria is suppose to be somewhat mystic.) 620 is also significant in Judaism because there are 613 commandments given in the Torah and seven rabbinic commandments instituted later for a total of 620!! Needless to say, I felt pretty awesome!