I actually didn't take a vacation, I just haven't written anything in quite sometime.  There is no particular reason for this, I wasn't any more or less busy than usual, I just haven't reported much.  So here are a few updates:

Over the weekend I went to Beer Sheva to see Roi! On Saturday he turned 25!!!!!!!!!!!! Feel free to wish him a belated happy birthday! I got him an awesome camping/hiking backpack because I am slowly turning him into a traveler! He is going to go all over the world with me. I told him he needs a big backpack because he will be carrying most of the heavy things! ;-) We didn't do so much on his birthday because he had a big test the next day, but it was still nice to be together and relax! 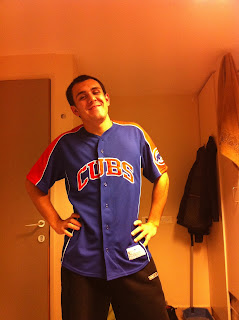 My parents got Roi a cubs jersey for Christmas!!!!!!! He looked awesome!!!!!! He's becoming so American already!!

That night I refereed a football game in Sderot, it is less than 6 miles from Gaza and we were instructed that if a siren rang we had 15 seconds to run to the safe houses, if nothing happened, the game would resume at the previous down. I was glad that they told us that last bit, because if there was a kasam, I certainly wouldn't care about which down we stopped at!

Also, speaking of football, can you believe the Bears are playing the Packers?!??!!!!!!!!! My parents are throwing a party! I wish I was there for the festivities. Of course, I want the Packers to win!!!!!!!!!!

Ulpan is going well. Our teacher gave us "report cards" this week. Mine was very good, a little high in my opinion. She said I understand everything perfectly, and I would tend to disagree. She also said that my writing is much better than my speaking, which I have to agree with. Speaking is not my strong suit.  She asked if it was the same with English, if my writing was stronger than my speaking, I told her no, I was wonderful at speaking English!

On January 10th, I went to Jerusalem for my interview at Pardes for the Pardes Educator's Program (PEP). I was unofficially accepted! I will start in September and study there, in Jerusalem, for three years! It'll be the longest I have lived in the same city since Muncie!!!!!!! I hope there are more things to do in Jerusalem! ;-) The program will teach me all sorts of Jewish studies and train me to teach in a Jewish Day School in the US.

The absolute WORST part about living in Israel is being so far from Jack! I really have a hard time being away from him. He is growing so fast and I will never be able to see him at this stage in his life.  A lot of my free time I spend watching him on YouTube, so thank you Katie and Rick for keeping me updated! He is crawling now and starting to talk. It is really killing me to not be there with him. (I also miss my family, I feel like I can't call my sister and parents enough.) August can't come soon enough!
Posted by Andrea at 1:33 PM