When Rabbi Eliezer was excommunicated, the Talmud says that all the plants on the earth wilted and died. I never understood until today. Losing Bonna Devora Haberman​ is such a loss. My heart is truly in pain. Losing a leader, mentor, role model, and friend.

The rosh chodesh that I snuck tefillin into the kotel, Bonna was with me. She saw me, nodded, smiled, moved closer to me. We had danced together before, but we didn't know each other. I knew it was okay, even if I couldn't see HaShem smiling, Bonna was smiling and it was all the reassurance I needed.

The next month, I was sure I would get arrested. But I wasn't the only one with tefillin. Bonna proudly stood with her tefillin on as well, beaming, glowing, only how Bonna did. Whatever the barrier, it was no longer there. We would forever be able to lay tefillin together at the kotel. Although, they told me they were going to arrest me. I asked them not to until after Hallel...and Bonna was arrested instead. Not that she went instead of me, but she was much more brave than I was. She willing went. I didn't want to go to jail, even if I knew I was breaking an unjust law. We never spoke about it. We just kept laying tefillin together every Rosh Chodesh.

Today is my Hebrew birthday, it's not a gift I ever expected, but I am so grateful that HaShem allowed me to be in Israel to say goodbye to Bonna. Tomorrow I am reading Torah at the Kotel. Sefer Torah or not, I can't think of a more appropriate way of honoring Bonna and her memory. 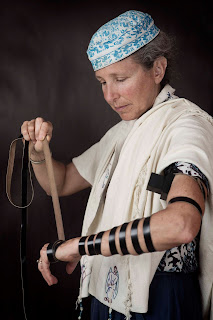