Rosh Hodesh Adar at the Kotel

We went to the Kotel (Western Wall) to pray this morning for Rosh Hodesh Adar. It started last night organizing taxis for everyone from Pardes who wanted to go. This morning, I woke up at 5:30...I made the decision to wrap my arm tefillin and wear my coat over it. I wrapped it until my wrist, so under my coat it couldn't be seen going through security.  I put my Rosh (head) tefillin in my inside jacket pocket.

I met three other people from Pardes at 6:30am to get a taxi to the Kotel. We waited in line at security. They took my tallit and wouldn't let me enter with it. They also took my empty tefillin bag. They didn't know that it was already on my body. Honestly, I didn't want them for protesting. I lay tefillin every morning, and it's difficult for me to daven shacharit (the morning prayers) without tefillin now. There is a connection that comes with the tefillin. There is also a connection with the tallit, but as I told the reporters after they took my tallit, I want to pray at the Kotel, that's why I came, so I'm willing to give up my tallit to be able to pray there on Rosh Hodesh. 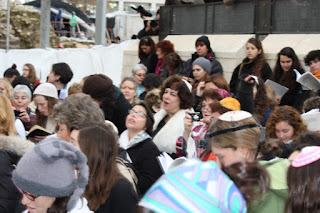 This picture was taken from Rabbi Jason Miller's blog.

In the picture above, I am in the green coat with my kippah and tefillin.  I didn't put it on right away. I did pesuki (the "warm up" prayers) but by the time we got to the Shema, I just felt like I couldn't keep praying without it. So I was holding it in my hands, and before the Amida, I put it on my head. I was really scared. I thought at any moment the police would come and take me away. But nothing happened. Nothing at all, it was amazing.

So when we got to Hallel (an added part of the holiday that is joyous.) it was time to dance! I asked a couple of girls next to me, who were a little nervous, but then I took their hands and led them to the front, and instantly, tons of women were dancing and singing and praising God at the Kotel. It always feels so good to dance during Hallel. 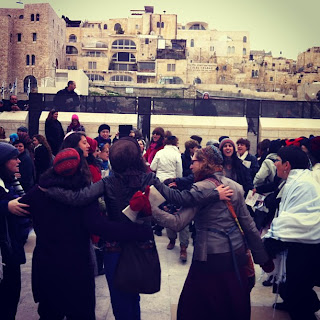 This was just a bit of dancing at the end. We were all dancing in during Hallel!! It was beautiful. 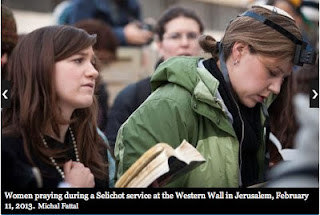 As soon as Hallel was over, I took off the Rosh Tefillin. This picture was in the Haaretz newspaper. There were many cameras in my face, so I prayed mostly with my eyes closed because it's very difficult to have good intention with so much distraction.  I was really nervous the whole time I had my tefillin on, but I felt so proud. I also have a spot at the Kotel, I am a Jew, it's also for me. And everyday I pray with my tefillin, so why shouldn't I be able to also practice how I practice at the Kotel? I should be able to!

In the end, 10 women got arrested. Including Sarah Silverman's sister, who is a rabbi. They were held for a longer time than usual because they didn't agree to not come back to the Kotel for 30 days which is the normal punishment. Also, paratroops who liberated the Kotel in 1967 went to the wall to support the women, it was really amazing to see them there.