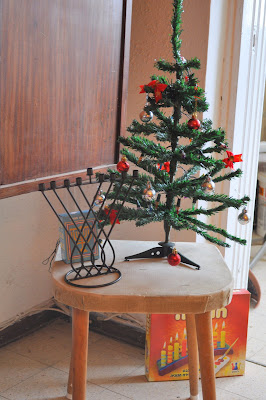 This is my baby Christmas tree and my new menorah! Under the stool, you can see a make your own menorah set! Maura and I are doing it Sunday afternoon! They're going to be awesome! 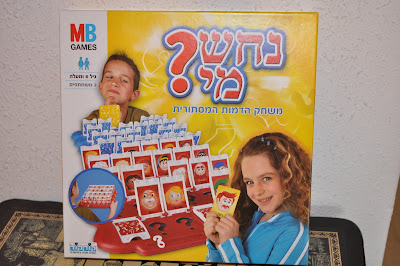 In Hebrew we learned the body parts and descriptions. Like "She has blonde hair" or "he has thick eyebrows." My teacher had brought in Guess who? for us to play in class! So I bought it too so I can practice at home. Roi played with me and he own, which was annoying, of course!! =) But I did it in Hebrew and he asked in English. He's really sweet and obviously humors me a lot!!

I first found the game at this store off of Allenby, in Tel Aviv, and it was 129 shekels, which was too much money because I had seen it online for $25. And I asked the guy to lower the price, which Maura thought was hilarious, because we weren't at a shuk/market, but really the game was too expensive. So he said he would lower it to 120 shekels, but no, it was too high. So we went to the mall and found Toys R Us...and guess what? (No pun intended!) it was on sale for 79 shekels!!!! That's a lot of shekel difference! 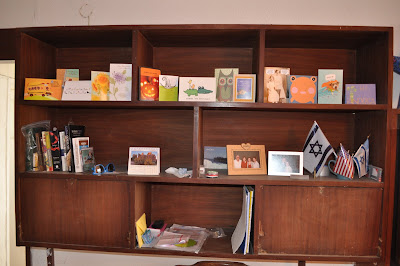 All my cards on my shelf!! I got a note from my grandma and a holiday card from my grandpa and grandma yesterday! It made me so happy to hear from them!!