Hillel in the snow

There is a very famous story about Hillel, which follows:

"Most famous perhaps is the incident which occurred before his rise to leadership, when he was not yet a scholar, but had a burning desire to study Torah. At that time, Torah study was tightly controlled and limited only to those of the highest caliber and to those who could pay for it. Hillel, working then as a woodchopper, did not have enough money to pay for entry into the Beit Midrash. On a freezing cold snowy day, he climbed onto the roof of the Study Hall, and lay at the "skylight" listening to the lecture, until he froze. When the scholars below observed his form above, they retrieved him, and changed the policy such that anyone who wished to study Torah could come in and do so." 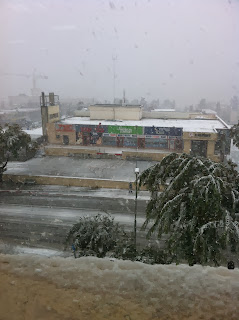 View out the window of the Pardes Beit Midrash.

Yesterday, in Jerusalem, the snow that had been warned about finally arrived. It wasn't that much snow. But for Israel, a place that isn't prepared to deal with this kind of weather, the city really shuts down. Yet, something very amazing happened. So many Pardes students arrived at school. Many of them very early for mechetzah and egal minyans, and even after, more for classes. Teachers and secretaries showed up, too. Level dalet and hey had nearly 100% attendance. We all braved the cold, freezing, wet, snow, ice in order to come study. Even when school was officially canceled after news of Jerusalem schools also being canceled, many students stayed for hours to continuing studying in the Beit Midrash. 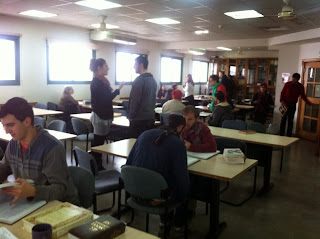 View inside the Beit Midrash!

Maybe we are all crazy. Maybe we just wanted to be where most of our friends were already. Maybe we couldn't imagine leaving to go back out into the snow. But I think it's something about Torah. We seem to be addicted. It fills us with something that we would all describe a little differently, but makes us feel good and helps us become better versions of ourselves. And b"h we have a place to study, unlike Hillel who wasn't allowed in, Pardes opens it's doors to everyone and offers Torah to anyone who seeks it.

So thank you Pardes for being so warm, loving, and open. Because no one wants to be outside in this weather, not even Hillel!