Not just once, but four times!

Like any other normal day, I received an email from the synagogue/beit knesset that I go to every week here in Jerusalem, Mizmor le David. Usually, I delete them because I know the prayer times and have my meals already planned. But with all the chaggim/holidays, I read through the mass email to make sure I didn’t miss anything. There was an announcement that on Simchat Torah women could read from the Torah. It’s an orthodox beit knesset, so I was shocked and excited at the opportunity. Before I knew what I had done, I emailed back to tell them that I wanted to read. 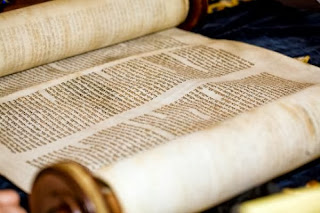 At this point, Simchat Torah was about ten days away. So while sitting in a shiur about sukkot, I picked out the part of VeZot HaBracha (the last reading in the Torah) that I wanted to read. I picked a short one, I didn’t want to bite off more than I could chew. I chose the fourth aliyah, it is only four pasukim/sentences. This is what I chose:

I practiced a lot. My trope teacher recorded if for me to make sure I was pronouncing all the words correctly. I kept referencing my trope book to make sure I had the notes right. I made my friends and roommates listen to me sing it over and over.


I always think reading Torah is important and a mitzvah, but this seemed extra special and extra important. One, I was going to read on a holiday. A holiday that is all about celebrating the Torah itself. So to read from the Torah on the day that celebrates Torah was extra special. Secondly, on a personal note, this was the first time that I would be reading Torah at an orthodox place that wasn’t Pardes or NFTY. I had read Torah many times for NFTY and the reform movement.  I have the utmost respect for the reform movement and it is one of my deep passions to work for them. I am usually one of the most educated Jews when I am reading Torah, and there are few people, if any, who know when I make a mistake. (I still take it very seriously and practice for weeks before I read for them.) And I also have read Torah a few times at Pardes. This is also nerve wracking, but it is a place where people know that we are students who are learning and people are gentle in correcting others and everyone is supportive. At Mizmor le David, people know what’s going on, they know exactly how it is suppose to be read. It’s serious, it’s a mitzvah.


I arrived so early in the morning, I was the first woman, and there wasn’t even a minyan of men yet. I was nervous. I put on my tallit and felt wrapped up in God’s presence, (I had asked before if it was okay if I could wear it, and they said it was fine!) and I started davening/praying which helped me relax and later we danced with the Torah for hours which also helped me calm down. Finally, it was time for Torah reading. It was already noon, I was ready, (and my amazing friends who came to support me were more than ready as well!) The women went outside and formed a separate minyan. At first I was annoyed, like the women were being kicked out. But I realized it’s too loud for two Torah readings to be going on at once. With the women, ten or men came out to insure there was a minyan.


On Simchat Torah, they read the torah portion many times. They do this to make sure that anyone who wants to do an aliyah, saying the blessing over the torah reading, has an opportunity. The person then receives a blessing called the Mi Sheberakh/May the One Who Blessed. It’s a blessing for healing and good health. It is traditionally read when the Torah is open. So this is a time for everyone to receive this blessing if they want.


It was finally my turn to read. A friend of mine did the blessing, I started, slowly and I tried to be loud. (It was hard to hear the people who read before me.) My friend had given me the advice to breathe and, “give yourself time” he said. It gives you a split second to think, annunciate, and look ahead. So I did. It was good, but the women thought I may be lost and “helped” me a little, even though I didn’t mess up. It was great. The after blessing was said. I stayed up there and did my own aliyah on the next torah reading, and received my own blessing.


Then we started over and I was waved up to read again. The women struggled over the blessing, but did it, and I read again. Perfectly.
There were so many people who wanted to say the blessing, they set up a third minyan in a side room and ten men crammed in to form yet another space to read torah. (In an orthodox setting, ten men are needed to read torah.) They asked me to go into that room because they needed more people to read. There was a man reading most of the portions, but when it got to the part that I knew, I asked if I could read it. They thought I wanted to say the blessing, but I told him I wanted to read the torah, and he asked again, “You want to read?” and again, I said yes, and the man stepped back and I took the yad/pointer from his hand. This time there were only three or four women in the room with the ten men and I was reading for a man who had said the blessing. And...I rocked it. It felt amazing.


I waited for one more read through of the Torah, and when it got to my part, the man handed me the yad with a nod. And I read, again...it didn’t get boring, it was more and more amazing every time. I did better every time. I was more confident with each reading. I became aware that it wasn’t just about my own reading, but that I was truly helping/assisting someone else fulfill a mitzvah. By my reading (four times!!!), they did the mitzvah of reciting the blessing and they received a blessing. I know I already said it, but it was so awesome!


Everyone who wanted to do a blessing did it. It was after one in the afternoon, I was starving, it was time to go home. I went to say bye to the man who I had originally emailed to say that I wanted to read Torah. He was smiling, happy and grateful that I read. He told me that next year I could read two portions! Be’ezrat Hashem/with God’s help, I will.


On my walk home, I was glowing. I felt so alive, so proud of myself. So proud of my own reading and that I helped other people do their own mitzvah. Maybe it was just torah, or maybe it was what torah helped me give to others that made me so happy. I’m not sure. But now that we are starting over on Shabbat with Bereshit, at the beginning of the torah again, I can’t help but think about what this year of torah is going to bring me and I can’t wait to get started!
Posted by Andrea at 1:55 PM

Israel is right place to buy a challah cover. There are many Tallit Store, where you can get all variety of designs, and colors in different sizes at affordable prices.

Our deepest fear is not that we are inadequate. Our deepest fear is that we are powerful beyond measure. It is our light, not our darkness, that frightens us most. We ask ourselves, 'Who am I to be brilliant, gorgeous, talented, and famous?' Actually, who are you not to be? Your playing small does not serve the world. There is nothing enlightened about shrinking so that people won't feel insecure around you. We were born to make manifest the glory of God that is within us. It's not just in some of us; it's in all of us. And when we let our own light shine, we unconsciously give other people permission to do the same. As we are liberated from our own fear, our presence automatically liberates others.