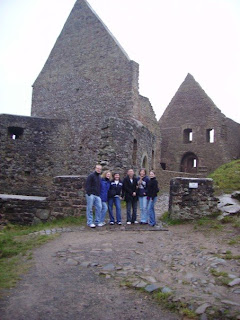 Today we went to Ramstein to go shopping! It was quite enjoyable. Things were not that cheap though. For example, an iPod was $179 instead of $199 and you could buy three Victoria Secret items for $15. So a little cheaper, but not great deals.

Afterwards, we drove to this little castle called Burg Lichtenberg. It's really little compared to some other things and more ruins really. Nonetheless, it was very exciting to see the area. Tomorrow we're going to Idar Oberstein to see a castle that is built into the wall of a mountain!

All the other student teachers are awesome and we get along great! It's an awesome mix of people and we all bring something special to our van rides!
Posted by Andrea at 2:26 PM